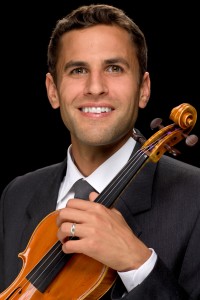 Violinist Daniel Sender is gaining an international reputation as a performer, educator and scholar.  Recent concert tours in Europe have been met with high praise, leading to increased demand in the classroom and on the concert stage.  A frequent guest soloist and principal artist with chamber and symphony orchestras throughout the region, Sender currently serves as Concertmaster of the Charlottesville Symphony, Charlottesville Opera, and the Virginia Consort.  Since 2017 he has also been a festival artist with the Wintergreen Festival Orchestra.

Daniel Sender was selected as a Fulbright U.S. Scholar for the 2020-21 Academic Year and will be teaching at the prestigious Liszt Academy (Budapest) and the University of Pécs during the Spring 2021 semester.  He was also previously awarded a Fulbright Student Scholar grant for his research in Budapest (2010-11), and attended the Liszt Academy as a student of Vilmos Szabadi.  He was formerly the first violinist of the Adelphi String Quartet, which held a fellowship residency at the University of Maryland, and was for four years the violinist of the Annapolis Chamber Players.  Sender has recorded for Centaur, Sono Luminus, Bifrost and other independent labels.

His scholarship focuses on the intersection of folk music and art music in Hungary.  With written and composed works, including the article “Bartók’s Rhapsodies: A Violinist’s Guide to Building an Authentic Interpretation” (American String Teacher), Daniel Sender has been bridging the gap between scholarship and performance relating to the music of central Europe.  Recent research has resulted in a new composition for violin and piano, “Roma Folk Dances: Village Tunes of the Hungarian Roma” (2019).  Additional new works are forthcoming.

As a chamber musician, Daniel Sender has performed with members of the Audubon Quartet, Axelrod and Left Bank quartets, and spent two years working intensively under the mentorship of the Guarneri Quartet.  Solo and chamber concerts have taken him to venues around the world including the Kennedy Center, National School of the Arts “Panayot Pipkov” (Bulgaria), Institute of Music at the University of Pécs (Hungary), Hungarian Embassy, Bartók Hall of the Erdödy Palace (Budapest), Smithsonian Museum of American History, Universität der Kunste (Berlin) and the Museum of Fine Arts (Montreal).

A native of Philadelphia, Sender attended Ithaca College, the University of Maryland, the Liszt Academy (Budapest) and the Institute for European Studies (Vienna).  His primary teachers include Vilmos Szabadi, Arnold Steinhardt, David Salness, René Staar and Gerald Fischbach.  He is on the performance faculty of the University of Virginia’s McIntire Department of Music and holds a faculty position at Interlochen’s Adult Chamber Music Camp.