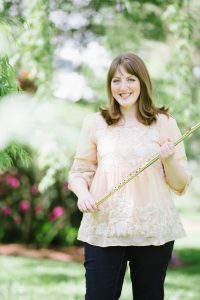 Kelly Sulick currently teaches at the University of Virginia and serves as Principal Flute in the Charlottesville Symphony.  Prior to her appointment, she served as Principal Flute with the Evansville Philharmonic Orchestra and as Consortium Instructor of Flute at the University of Evansville for three years.  She earned her Master of Music degree in Flute Performance from the University of Southern California; prior to her graduate studies, she earned a Bachelor of Music degree in Flute Performance and a Bachelor of Arts degree in English Language and Literature from the University of Michigan, where she graduated with highest honors and was named a James B. Angell Scholar for her academic achievements.

An active orchestral musician, Ms. Sulick has performed with the Richmond Symphony Orchestra, the Ash Lawn Opera Orchestra, the Owensboro Symphony Orchestra, Orchestra Kentucky, and the Livingston (MI) Symphony.  She completed three seasons as principal flute with the Young Musicians Foundation Debut Orchestra in Los Angeles, California.  Hailed as “flawless” by the Evansville Courier Press for a concerto performance with the Evansville Philharmonic Orchestra, Sulick has also appeared as a concerto soloist with ensembles throughout the country, including the Southern Illinois Music Festival Orchestra, the Charlottesville Symphony, and most recently the Ann Arbor Symphony Orchestra and alongside Sir James Galway at the Kennedy Center.  Equally at home on the concert and popular stages, Ms. Sulick has performed and recorded with several rock bands, including The New Fidelity, a Mod-Power Pop outfit from southern California; Superdot, a world music group based in Detroit; Homesick Elephant, a folk duo from Los Angeles; and Michigan singer-songwriter Timothy Monger.

A champion of new music, she has commissioned and recorded dozens of works for solo flute and flute with electronics, and has premiered several additional works for solo flute and chamber ensemble.  She has performed at the SEAMUS National Conference, the Atlas INTERSECTIONS festival, the TomTom Founders Festival, the Technosonics Festival, and the Minimalist Jukebox series, a music festival curated by John Adams.  She has worked with such notable composers as Leslie Bassett, William Bolcom, Matthew Burtner, Evan Chambers, Michael Daugherty, Karel Husa, Daniel Kessner, Lowell Liebermann, Judith Shatin, and Frank Ticheli, among others.

An avid chamber musician, she is the co-founder of .thrum, a new music collective, and is a member of the EcoSono Ensemble, an eco-acoustic cohort that explores connections between music, technology, and environmental activism.  She also performs regularly as a member of the Albemarle Ensemble, the University of Virginia faculty woodwind quintet, and serves as Director of the University of Virginia Chamber Music Series.

Ms. Sulick maintains a national profile as a performer and educator, having performed and presented at six National Flute Association Conventions, the International Double Reed Society Conference, the Richmond Flute Fest, and at multiple Mid-Atlantic Flute Conventions.  She has given masterclasses throughout the country; most recent engagements include the University of North Carolina-Chapel Hill, Penn State University Flute Day, Virginia Tech, Western Kentucky University, CalArts, and San Diego State University.  She served as Guest Artist for the 2012 Hampton Roads Flute Faire.  Active within the flute community, she currently serves as Vice President of the Flute Society of Washington and as Chair of the Flute Club Committee of the National Flute Association, and was the Volunteer Coordinator for the 2015 National Flute Association Convention in Washington, D.C.  She also founded the University of Virginia Flute Forum, a free annual flute festival featuring guest artists, masterclasses, and recitals accessible to all members of the community.

Ms. Sulick won second place in the 2010 National Flute Association’s Young Artist Competition, and was awarded the prize for the best performance of Kristin P. Kuster’s “Perpetual Afternoon”.  She can be heard on several compact discs, including William Bolcom’s “Songs of Innocence and of Experience” under Leonard Slatkin, a Naxos release that received four Grammy awards including Best Classical Album.