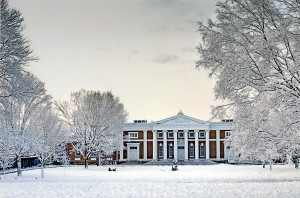 The University Singers is the University of Virginia’s flagship choral ensemble, heard by thousands each season in performances of a cappella and accompanied choral repertoire, including major works with orchestra.  In 2017, the group joined the Charlottesville Symphony on the steps of the Rotunda to perform for UVA’s Bicentennial Launch Celebration, before an estimated crowd of 20,000.  In recent years, the Singers have also sung for Les Misérables creators Claude-Michel Schönberg and Alain Boublil during their UVA residencies, sung for the 2016 UVA Holiday greeting which received more than 400,000 views on social media, and taken a two-week concert tour of England, the Czech Republic, Poland, and Austria.  During the pandemic, they continued to present virtual performances, and hosted online master classes with Eric Whitacre, Alice Parker, and other choral luminaries.

Founded in 1957, the group became a primarily student ensemble soon after UVA began admitting women in 1970, and celebrated their 60th anniversary with the 2017-2018 season.  Historical highlights have included concerts and workshops with Bobby McFerrin, Meredith Monk, and Otto-Werner Mueller, a performance for Hillary Clinton, a performance for the 2010 VMEA Conference, and frequent collaborations with the Charlottesville Symphony including for the popular Family Holiday Concerts.  Recent repertoire has included Beethoven’s Symphony no. 9 with the Charlottesville Symphony, Bach's Mass in B minor, Handel’s Messiah, Bernstein’s Chichester Psalms, Verdi’s Requiem, and Vaughan Williams Dona Nobis Pacem, premieres of works by Stephen Paulus, Forrest Pierce, Judith Shatin, and Eric Whitacre, and a program featuring African-American composers such as Nathaniel Dett, Moses Hogan, and H.T Burleigh.  Recent North American tours have taken the group to Atlanta, Boston, Buffalo, Charlotte, Charleston, Chicago, Cincinnati, Cleveland, Montreal, New Orleans, Orlando, New York City, Philadelphia, Providence, Toronto, and the National Cathedral in Washington D.C.  The group has also been heard on previous tours in Italy, Belgium, Germany, Russia, and Switzerland, and recordings include a CD of Mozart's Coronation Mass and Vesperae Solennes de Confessore.  The 2018-2019 season began with performances of Bernstein’s Mass at the Paramount Theater as part of the Leonard Bernstein centennial, and 2021-2022 includes collaborations with the Oratorio Society of Virginia, and a program celebrating 50 years of women at UVA.

Students in the University Singers come from UVA's eight undergraduate schools, including Arts and Sciences, Education, Nursing, and Engineering, as well as several of the graduate and professional schools. While approximately 25% are music majors, the ensemble is open to any student by audition, and is a for-credit curricular class. Together, members enjoy an esprit de corps arising from the pursuit of musical excellence, and the camaraderie the singers develop offstage.

For more info visit: http://music.virginia.edu/usingers
Auditions: Auditions for the University Singers take place at the beginning of each semester.
To make a gift: https://www.givecampus.com/campaigns/21729/donations/new
or write the ensemble at: university-singers@virginia.edu

Please click here to view the list of donors who have made gifts since December 3, 2020 in support of the orchestra’s musicians, performances, and education and outreach programs.  We thank them for their generosity and confidence in our mission!